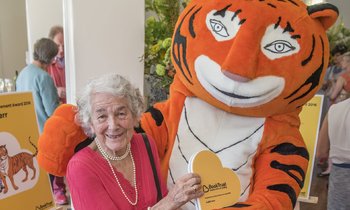 Judith Kerr (b.14 June 1923, Berlin, Germany - d. 22 May 2019, London, England) OBE was an author and illustrator of children's books, most famous for The Tiger Who Came to Tea, Mog and When Hitler Stole Pink Rabbit.

Tropes associated with Judith Kerr include: