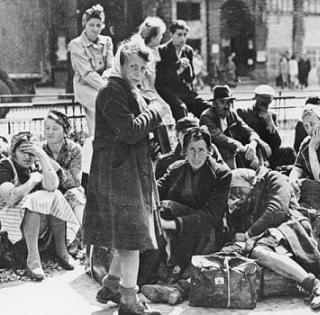 War makes a setting unhealthy for people. If for no other reason that it tends to tear up the crops and cause you to starve. And that's if they are careful not to shoot at you, and you have no particular thing about you that would cause them to target you - and they don't do it just for fun.

This causes people to get up and leave, even at the price of abandoning much of what they own, if not all. The fortunate ones do it before they are forced to; these ones are able to carry the most with them, but even they have to leave things behind and plunge into an unknown setting, surrounded by strangers, in hopes of finding safety.

Additionally, you may be forced out: by invaders who want to give your land to their own people; by your own government if it fears your loyalty or wants to appropriate your property for military uses; or either side adopting a scorched earth policy. The effect is much the same (though you may actually be forced, as well, to leave behind your property for the use of others).

The mere flight can constitute a story in itself, filled with danger — it may have to on foot though there are, in theory, trains, cars, or planes for transport, and even the weather can be a peril — but arriving is no guarantee that the story will end. Landing in an unfamiliar location, often with little, often in a place already suffering its own shortages of food and other necessities, owing to the war — surviving when stuffed in a refugee camp — finding a way to make a living there — discovering whether you can ever return or find a new place to live, have filled many stories.

From the point of view of the destination, these destitute people can constitute a crushing burden. They can also contain spies and saboteurs, be deserters, carry diseases, or otherwise endanger their destination.

Blitz Evacuees is a subtrope. May result in Invading Refugees. If the war refugees are escaping from military forces which want to specifically exterminate them, then this can overlap with Genocide Survivor.

Truth in Television, and widespread; please list only particularly striking examples in the Real Life section.