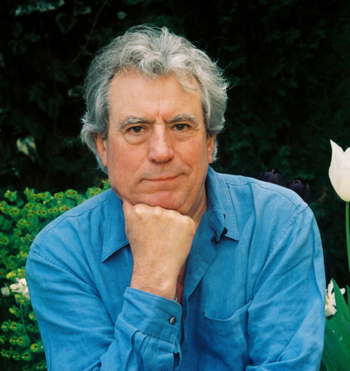 "I've been very lucky to have been able to act, write and direct and not have to choose just the one thing."
Advertisement:

Terence Graham Parry Jones (1 February 1942 – 21 January 2020) was a British comedian, actor, film director and author. He is best remembered for being a member of Monty Python and was the only Welshman in the team. Jones played the Nude Organist in many opening sketches of Monty Python's Flying Circus and was most talented in convincingly portraying older women, most famously Brian's mother Mandy in Monty Python's Life of Brian. When the team made their foray into films it was Jones who sat in the director's seat and kept control over the spirit of the series.

Apart from his Python endeavours, he also directed the movies Erik the Viking (1989), The Wind in the Willows (1996) and Absolutely Anything (2015). Together with Michael Palin, he co-wrote and acted in the comedy series Ripping Yarns. He was also a prolific author, writing children's medieval fantasy novels, as well as serious books on medieval history (notably Chaucer's Knight: Portrait of a Medieval Mercenary, which sets out to cast new light on a major character in The Canterbury Tales) and a Saturday Morning cartoon and video game called Blazing Dragons. He was also involved in many documentaries about history, including Terry Jones' The Crusades, Terry Jones' Medieval Lives and Terry Jones' Barbarians.

He largely retired from public life in 2016 due to primary progressive aphasia, a severe form of dementia that robbed him of the ability to communicate both through speech and written words. He sadly passed away due to frontotemporal dementia on January 21, 2020.

He should definitely not be confused with the American Islamophobic preacher of the same name.