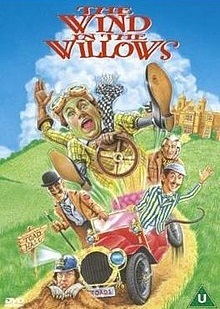 The Wind in the Willows is a 1996 comedy film based on the novel of the same name. The film was adapted and directed by Terry Jones, who also starred as Toad, with Steve Coogan as Mole and Eric Idle as Rat. (Fellow Monty Python alumni John Cleese and Michael Palin have cameos, while Terry Gilliam had to decline one due to other commitments.)
Advertisement:

In this live action adaptation, the Talking Animal characters are depicted as mostly human but with a few indicative animal features: for instance, Toad has green skin, while Rat has a long nose and prominent whiskers.

The novel's episodic structure is streamlined into a more linear plot driven by a Community-Threatening Construction masterminded by the Weasels.

The Weasels intimidating the Mole.

The Weasels intimidating the Mole.