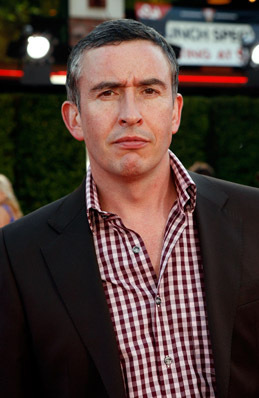 "There's something quite joyful about doing comedy which doesn't really need much analysis. I'm not elitist. I like to do crowd-pleasing stuff which is a bit smart, but is just about belly laughs."
Advertisement:

He began his career as a voice artist for the satirical political puppet show Spitting Image, and would later join forces with comedy titan Armando Iannucci on satires On the Hour and its TV sequel The Day Today. Here, he created his most recognisable and celebrated comedy character: that of Alan Partridge, an arrogant, socially awkward radio presenter desperately trying to get ahead in show business only to be met with failure due to his own lack of talent and hubris. Partridge has since gotten his own radio show, a television show based off the radio show, a second television show, a book, a film and several other off-shoots.

He's broken into Hollywood as well, with roles in the likes of The Other Guys, Tropic Thunder and Night at the Museum. Aside from his comedic talents, he's received critical acclaim for his more dramatic turns such as his leading role in the Oscar-nominated Philomena.

He's a long-time enemy of the British tabloids such as The Sun, The Daily Mail and the now-defunct News of the World due to the frequent harassment he and his loved ones endured from them. His opposition to toxic tabloid culture resulted in him being one of many victims of the phone hacking scandal that destroyed The News of the World, and he with others he testified at the Leveson Inquiry.