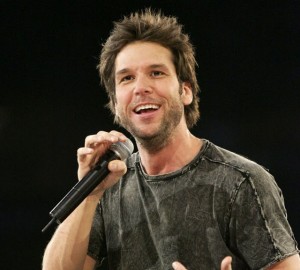 Dane Jeffrey Cook (born March 18, 1972) is a stand-up comedian and film actor. While he's still active today under both professions, a mention of his name is likely going to bring back memories of his heydays in the mid-2000s.

Cook is well-known for his stage persona, which he reportedly based upon his parents, and which involves a great deal of long-form storytelling, surreal tangents, and babbling non-stop like he's constantly almost out of breath. He was also popular for being one of the first stand-up comics to rise to fame by capitalizing on the Internet via a personal webpage and a MySpace account, which gave him a sizable fanbase among college students and contributed to impressive album sales.

However, Cook is nowadays inseparable from his reputation as the household name of famously unpopular comedians among other stand-up comics and comedy writers, not least mentioning the memetic status it's gained among the public. This includes an infamous rant by Dr. Cox on Scrubs.

Notably, with the exception of Dan In Real Life, Cook's films tend to be received very poorly by movie critics. He also appeared as himself in a 2011 episode of Louie, where he discussed a plagiarism controversy involving allegations that Cook stole bits from Louis C.K.

He's the Trope Namer for The Friend Nobody Likes, based off a memorable routine of his in which he discusses the trope in detail.