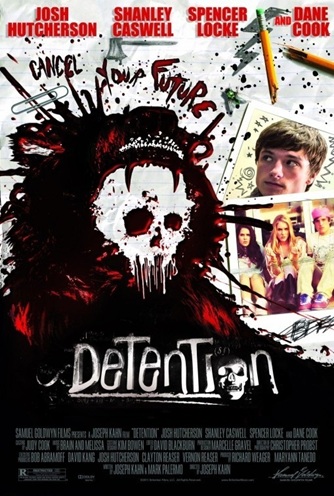 Detention is a 2011 filmnote Though it was released in 2012, it was finished and making the festival circuit the prior year. by Joseph Kahn, maker of the Cult "Classic" Torque. A send-up of teen horror movies and teenage life in general, it follows a group of students at Grizzly Lake High School who must come to grips with a masked killer, dressed like the villain from the horror franchise Cinderhella. When the principal (played by Dane Cook) suspects that one of them is the killer, he sends them all to Saturday detention in place of the prom.

And then things go completely crazy.

The main thrust of the film is that each of the main characters is the protagonist of a different teen movie. Riley Jones, the heroine, is a Cool Loser and Snark Knight in the mold of Daria Morgendorffer, Juno MacGuff, or Angela Chase; Clapton Davis, the male protagonist, is a Ferris Bueller-esque High-School Hustler; the cheerleader Ione Foster has swapped bodies with her ex-cheerleader, stuck-in-the-'90s mother Sloan in a plot reminiscent of Freaky Friday; Sander Sanderson is the heroic nerd who's trying to get the girl; the Jerk Jock Billy Nolan has insect-based superpowers that he possesses little control over, in the vein of Peter Parker; and finally, Elliot Fink is living in an apocalyptic time warp straight out of Donnie Darko. Together, with the help of a time-traveling bear mascot, they must come together to not only save their own asses, but the entire world — or at least, Grizzly Lake, because really, have any of these kids ever seen the world outside Grizzly Lake?

Not to be confused with th... well, actually, six other works of the same name: another, less comedic slasher movie made in 2010, a 2003 Dolph Lundgren action film about drug runners attacking a school, an animated series from 1999-2000, an indie Taiwanese horror game, the 2019 film based on the video game and the 2020 series based on the video game.