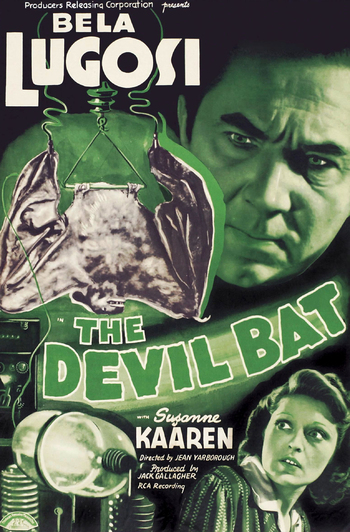 The Devil Bat is a 1940 Sci-Fi Horror film directed by Jean Yarborough and starring Bela Lugosi.

Dr. Paul Carruthers is a chemist who designed a perfume for a cosmetics company. Said perfume then wound up making his partners a fortune, while Carruthers—who'd sold off his partnership stake in the company—was left with nothing but a relatively paltry $5,000 bonus. Out of a misplaced sense of revenge, Carruthers decides to experiment on a bat to make it large and ravenous. He then trains it to kill anybody wearing an aftershave he designed and gave to his perceived enemies as a "gift".