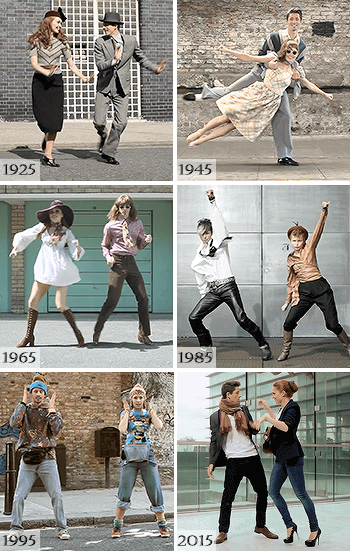 Dances and fashions come and go,

A Montage where a character or a scene shifts from one era to another. A "Mister Sandman" Sequence may or may not occur on a particular era, may it be a person, a place, or an item. The one thing that this montage is very prevalent of is that the atmosphere of the setting, architecture and art styles, technology, clothing and hairstyle, and occasional background music sequentially changes. One of the most common usage is a product or a subject going through each decade in the 19th, 20th and 21st centuries, due to these centuries undergoing rapid changes in all aspects of life.

Often employed to make the point that "X has been around a lot longer than you, so you'd best respect it, son."

Doesn't necessarily have to do with the actual Progressive Era, which was from about the 1890s to the 1920s.