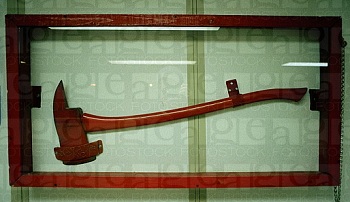 A character is in a public building and for whatever reason, needs a weapon. He may be the hero in dire trouble and in need of a way to defend himself, or a villain who needs to prove just how Ax-Crazy he is. But where does he find one...?

Simple: All public buildings have fire axes. It doesn't matter whether having a weapon in such easy reach would be irresponsible in that location, such as a school or an airplane.note Airplanes do have fire axes (fires on board aircraft in flight are even more dangerous than fires in buildings on the ground, and often occur behind panelling which needs to be cut away to get at the fire [and is not a structural element, thus making it safe to cut away]; additionally, an ax is extremely useful should one need to extricate oneself or others from airplane wreckage, which is why airplane axes are often referred to as crash axes), but these are stored in the cockpit, well away from anyone except the flightcrew. All the character needs to do is break glass, get ax. Sure, it might even set off an emergency alarm, but who cares?

Subtrope of An Axe to Grind. Sister Trope to Fire Hose Cannon, where a character uses a conveniently located fire hose as a weapon instead of a fire axe.