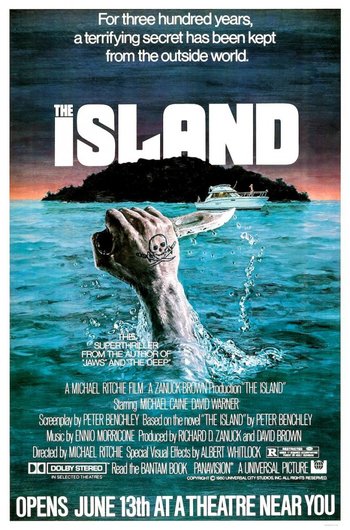 The Island is a 1980 American slasher film directed by Michael Ritchie and starring Michael Caine and David Warner. The film was based on a novel of the same name by Peter Benchley who also wrote the screenplay.

Skeptical journalist Blair Maynard (Caine) is assigned to explore the area known as the Bermuda Triangle, where thousands of boats have disappeared in a three-year span. When he leaves the Florida coast with his adolescent son, Justin (Jeffrey Frank), their boat is shanghaied by a group of pirates led by the tyrannical John David Nau (Warner). The pirates, who have lived undisturbed in the area for centuries, see father and son as new blood for their increasingly inbred clan.

Not to be confused with the 2005 sci-fi film about cloning.

Tropes in The Island: