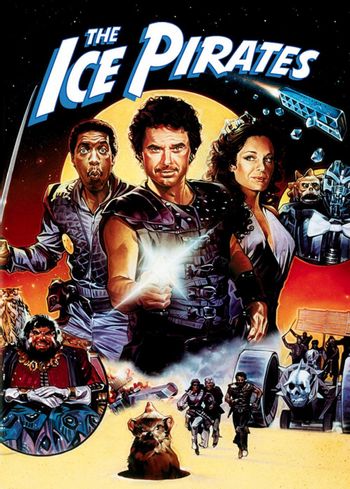 The Ice Pirates is a 1984 comedy/science-fiction film. It was directed by Stewart Raffill (of Wilderness Family and Mac and Me fame), who co-wrote the screenplay with Krull author Stanford Sherman. The movie stars Robert Urich and Mary Crosby. Other notable featured actors are Anjelica Huston, Ron Perlman, Michael D. Roberts, Bruce Vilanch, John Carradine and football great John Matuszak. It is considered to be a Cult Classic by many science fiction and B-movie fans because the movie doesn't really take itself seriously and everybody involved seems to have a great time hamming it up.

The film takes place in a future where water is an immensely valuable substance, both as a commodity and as a currency. Princess Karina (Crosby) is a spoiled princess who purchases captured space pirates Jason (Urich) and Roscoe (Roberts). They then proceed to locate a "lost" planet that contains massive amounts of water. The planet must be approached on a specific course or the ship will be suspended in time forever. The course apparently contains some sort of time distortion.

The Ice Pirates has examples of: