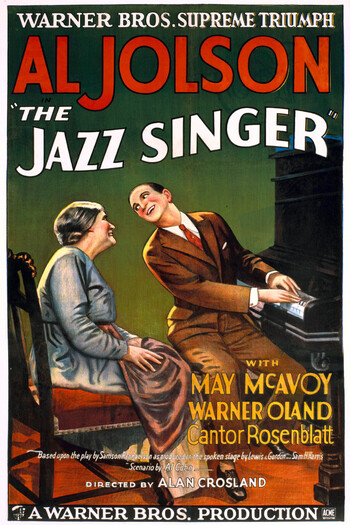 "You ain't heard nothin' yet!"
Advertisement:

The Jazz Singer, a 1927 musical drama film directed by Alan Crosland and released by Warner Bros., tells the story of Jakie Rabinowitz (Al Jolson), the son of a Jewish cantor, who declines to follow in his father's footsteps. Instead, he dissembles his Jewish identity while trying to make it in the world of popular music. Just as he's about to hit the big time, his father falls ill, forcing Jakie to choose between his family and his show-biz dreams.

While popular legend has given it a reputation as the first "talkie", The Jazz Singer is fundamentally a silent film, with an atmospheric musical backdrop, no sound effects, and dialogue on title cards. It does, however, have several prerecorded songs which are lip-synced (with variable success), and during the filming and recording of one of these songs, Jolson ad-libbed a spoken intro: "Wait a minute, wait a minute, you ain't heard nothin' yet! Wait a minute, I tell ya! You ain't heard nothin'!" (Additionally, the film has one short synchronized dialogue scene where Jakie talks to his mother.)

Audiences at the time definitely heard something in that.

Experiments in recorded film sound were nothing new; as far back as 1894, an Edison film of a violin player was paired with a recording of the instrument. In 1926, the Warner Bros. film Don Juan was released with a prerecorded, instrumental soundtrack, eliminating the need for live accompaniment. Sunrise, a critically adored experimental melodrama released the same year as The Jazz Singer featured a line or two of background chatter as part of the soundtrack. What The Jazz Singer brought to the table was an ambitious use of synchronization (or, as Warner dubbed it, the "Vitaphone" process). Even that, if confined to the songs, might have remained a sterile gimmick. But speech — that was something else. The first "all-talking" picture was The Lights of New York, a gangster film released in 1928.

Oh, yeah — the blackface scene. The redeeming element may be that the song — "My Mammy" — reflects Jakie's reconciliation with his own mother; in a way, Jakie is identifying very deeply with the stereotyped "darkie" character he portrays. It was also 1927.

The film was adapted from the 1925 play of the same name by Samson Raphaelson, which was based in turn on Raphaelson's own 1922 short story "The Day of Atonement". Warner Oland (who would soon become well known for playing Charlie Chan onscreen) and Eugenie Besserer portray Jakie's father and mother respectively, while May McAvoy plays Mary Dale, a dancer who becomes his girlfriend and showbiz mentor. Real-life cantor Yoselle Rosenblatt appears briefly as himself performing at a concert Jakie attends. And future star Myrna Loy has an uncredited bit part as a chorus girl.

There were three remakes of this film, one in 1952 starring Danny Thomas, one as an episode of NBC's Ford Startime anthology series in 1959 starring Jerry Lewis, and one in 1980 starring Neil Diamond (with Laurence Olivier as his father).

Tropes included in either the 1927 or the 1980 versions of this film include:

Parodies of the basic plot (not specific to any of the film versions) include: