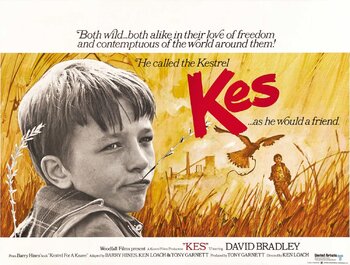 Kes is a 1969 British drama film directed by Ken Loach, based on the novel A Kestrel for a Knave by Barry Hines. It starred (relatively) unknown actors with perhaps a handful that people might recognise, which has led to the movie being categorised by film historians as a social realist movie. It was Loach's second film that he ever made and became a Breakthrough Hit when released, although the thick-accented characters made the film stumble a little outside of the UK.

In the mining town of Barnsley in Yorkshire, fifteen-year-old Billy Casper (David Bradley) is the child pariah of the area. He is bullied at home and school by everyone, making his mother feel as if she can never understand him. This is probably because Billy has a history of stealing, but has left it behind him (although he'll occasionally steal some eggs and milk), and nobody wants to trust him. With the whole world seemingly against him, Billy becomes interested in kestrels and uses his skills of deception, sneakiness, and theft to try and train the animal falconry.