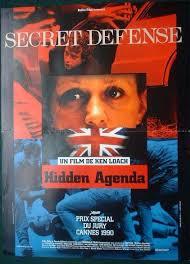 A 1990 political thriller film centered upon The Troubles, directed by Ken Loach and starring Frances McDormand and Brian Cox.

McDormand plays Ingrid Jessner, an American human rights activist whose colleague Paul Sullivan (Brad Dourif) is killed while investigating allegations of criminal acts by the British government in Northern Ireland, such as the murder and torture of IRA suspects. While in the company of an IRA sympathizer who claims to have knowledge of doings even shadier than this, both are shot to death by masked gunmen. In the aftermath, police claim they ran a barricade and were lawfully fired upon. Inspector Peter Kerrigan (Cox) is sent in from England to investigate, as it's felt the locals are too compromised. A tape recording is discovered that reveals a conspiracy at the highest levels of the British government...