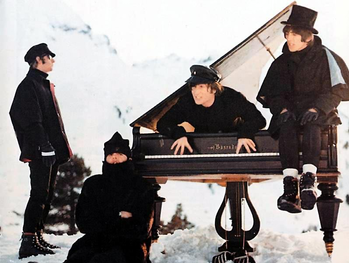 From left to right: Ringo, Paul, John (playing piano), George. Just in case.
Superintendent: Oh come on now lads, don't be windy, where's that famous pluck?
John: I haven't got any, have you George?
George: Did have.
Paul: I have had.
Ringo: I will have! Lead on!
Advertisement:

In the mid-1960s, The Beatles were the hottest thing since sliced bread. The four guys from Liverpool not only topped the charts with their music, but they topped the box office with their movie A Hard Day's Night in 1964. So, in 1965, they, director Richard Lester, and producer Walter Shenson got back together to make another movie for United Artists. The result was Help!

The plot involves a cult from "the eastern country" (presumably, but not definitely, India, and loosely based on the Thuggee

) who make sacrifices to their goddess, "Kaili". The person to be sacrificed wears a large ring with an enormous ruby in it. Unfortunately, the cultists find out at the ceremony that the girl who was supposed to be sacrificed mailed the ring to Ringo Starr, who is now wearing it. So, the cult scrambles to England to get the ring.

The problem is, nobody can get the ring off Ringo. Thus, the deadline for the ring going to its original sacrifice passes, and Ringo is now the official sacrifice for the cult. In their attempts to get the ring off Ringo, the Beatles approach two mad scientists. The mad scientists fail to get it off, and the Beatles cease co-operating with them. By this point, the scientists have decided that it's their ticket to world domination. This leads to a chase which leads the Fab Four and both sets of their pursuers to the Austrian Alps, Salisbury Plain (near Stonehenge), Buckingham Palace and The Bahamas.

The soundtrack album has its own entry.

So these are the famous tropes, eh?:

Inside the Beatles' house in Help!. From outside it looks like four houses, but on the inside it's one huge pad, with one section color-coded for each member and each with its own special attribute.

Inside the Beatles' house in Help!. From outside it looks like four houses, but on the inside it's one huge pad, with one section color-coded for each member and each with its own special attribute.