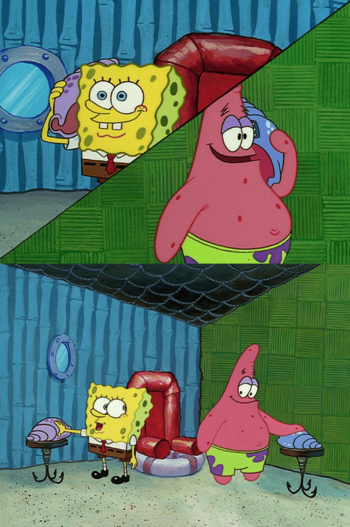 A situation (usually) played for comedy in which two people are talking on the phone, yet are within reasonable speaking distance of each other, sometimes even standing right next to each other. Often times, they are fully aware of this, and for reasons unknown, continue talking via phone anyway.

Though this trope in the world of fiction is played to depict the characters as lazy or frivolous, it's increasingly common Truth in Television now that cell phones are near ubiquitous since it's a quick and easy way to find where your friend or family is. A small while back a short distance call might also have been made to locate your lost cell, though nowadays it's less common as iOS and Android both provide ways for you to make your phone ring without an actual phone call (via Apple's and Google's Find My iPhone/Device, respectively).

This can also happen in office settings, especially of the "cubicle farm" variety. You and a co-worker in a nearby office are on a three-way conference call with someone else farther away, resulting in you and the co-worker hearing each other "in stereo".

For the non-comedic, creepy variant, see The Calls Are Coming from Inside the House and I Can See You.