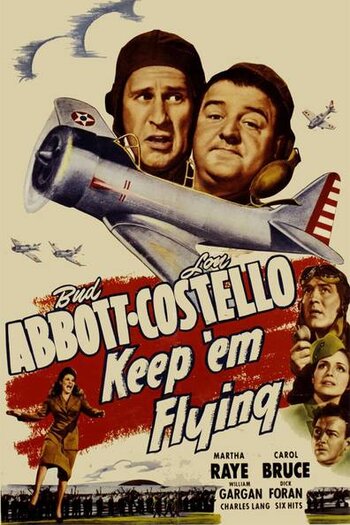 Keep 'em Flying is a 1941 musical comedy starring Abbott and Costello and Martha Raye, the third musical service comedy from the duo released in 1941 in the wake of the Peacetime Draft of 1940.

Arrogant, but brilliant stunt pilot Jinx Roberts, and his two bumbling ground crewmen Blackie and Heathcliff (Abbott and Costello) decide to join the Army Air Corps after being fired from a carnival. Just before joining, Jinx falls for lounge singer Linda Joyce. In the Cal-Aero Academy of the Air Corps, Jinx finds that Linda has become a USO hostess, his former co-pilot Craig Morrison (who he has an icy relationship with) is now his instructor at the academy, and Linda’s brother Jimmy is his new bunkmate. Jinx quickly proves a natural, but arrogant as ever. While Jimmy is a fine pilot, he’s reluctant to fly solo as he’s been terrified ever since his father’s plane crashed years ago. Blackie and Heathcliff get into and out of trouble, dating the twin Phelps sisters, conservative Barbara and wacky Gloria, and taking a land torpedo – and later a biplane – for accidental rides. Jinx decides to try to impress Linda by helping Jimmy with his problem, but Jinx’s help may be the last thing Jimmy needs.

Released in the wake of the Army Air Corps. being retooled into the US Air Force some five months prior, the film was largely seen as a bit of a step down from their previous movies, but was still a success, being credited with increasing volunteer numbers for the Air Force.