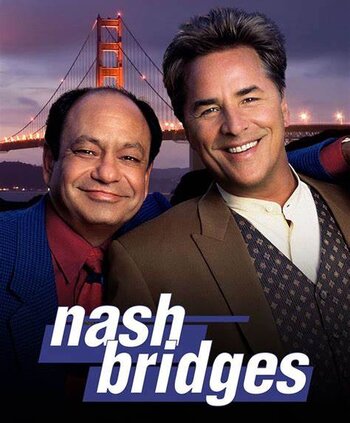 Don Johnson and Cheech Marin star as Nash Bridges and Joe Dominguez in this 1990s buddy cop show with elements of both drama and comedy about the unorthodox SIU squad of the San Francisco Police Department. The cops use a slick streetwise style to catch bad guys and are some of the best at it around. It also featured Inspectors Harvey Leek and Evan Cortez as a Beta Couple and fellow members of the SIU team.

Other notable team members include Kelly Hu as Michelle Chan (1997-1998) and Yasmine Bleeth as Caitlin Cross (1998-2000). The show also featured the personal lives of the officers particularly Nash, his daughter Cassidy was a series regular throughout its run. Also featured regularly were Joe's wife, Inger, and Nash's elderly father, Nick. A special mention should go out to Nash's yellow Barracuda convertible, which was such an integral part of the show that it even got its own Day in the Limelight episode.

Though the series copyright is held by Rysher Entertainment, for the show's last two seasons Rysher's logo was replaced with that of Paramount Television, as Paramount began distributing the Rysher library in the summer of 1999.