Shot in the Ass 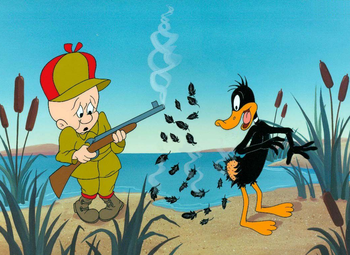 Th-th-th-That hurts, Folks!
"Last time I got shot in the arse! I am in mourning for my arse!"
— Izzy Buttons, The Mummy Returns
Advertisement:

Exactly What It Says on the Tin — a character takes a bullet to the hindquarters. The ultimate in Amusing Injuries which, as well as being Only a Flesh Wound, is an assisted Literal Ass-Kicking by a bullet to the buttocks. Or an arrow. Or a bolt of lightning. Or anything. Usually Played for Laughs because, seriously, a bullet to the ass?

In Real Life, any gunshot can kill, especially if left alone long enough to get horribly infected. But of all the places on the body where one can get shot, the butt has the greatest chance of not being life-threatening and causing any permanent damage when treated properly. In fact, survival experts often (semi-seriously) advise people confronted by guns to stick out their butts to offer them as the least risky targets. Of course it's still pretty undignified, especially as far as deaths go.

In several wars, being shot in the ass was known as a "million-dollar wound", because it was serious enough to get you medically discharged and shipped home but not permanently debilitating in any way once it had healed, and, as such, worth a million dollars to a war-weary grunt.

If you happen to deliver one of these, a "turn the other cheek" one-liner is always good form.

Sub-Trope of Pain to the Ass. Compare Butt Biter and Literal Ass-Kicking.

The Magicians: Season 2, Episode 3 - Sometimes it's not a good idea to insult someone pointing a crossbow at you. This woman discovers that here upon receiving a puncture wound in her left buttock.

The Magicians: Season 2, Episode 3 - Sometimes it's not a good idea to insult someone pointing a crossbow at you. This woman discovers that here upon receiving a puncture wound in her left buttock.