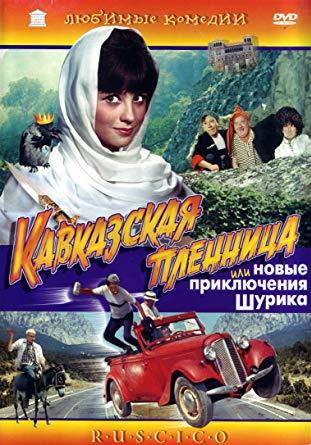 Kidnapping, Caucasian Style (original title: Кавказская пленница, Prisoner of Caucasus) is a 1967 Soviet comedy film by Leonid Gaidai with the central plot revolving around the old tradition of bride kidnapping in the North Caucasus. The film is a part of the so-called "Shurik Trilogy" (also including Operation "Y" and Ivan Vasilievich Changes Profession) and is also the last film to feature a "Three Stooges"-like trio of bumbling crooks known as the "Coward" (Georgy Vitsin), the "Fool" (Yuri Nikulin), and the "Pro" (Yevgeny Morgunov).

The main character is an ethnography student named Shurik (Aleksandr Demyanenko) who goes to Caucasus to collect the local customs and folklore. On the way, he meets an ambulance truck driver named Edik (Ruslan Akhmetov) whose vehicle perpetually refuses to start. They meet a young woman named Nina (Natalya Varley, voiced by Nadezhda Rumyantseva), a pedagogical student. Her uncle Dzhabrail (Frunzik Mkrtchyan) works as the driver for the local corrupt official and rich guy named Saakhov (Vladimir Etush). Shurik's attempts to collect folklore result in him being frequently drunk, as the locals refuse to tell him their folklore (in the form of long and elaborate toasts) unless he drinks with them.

Saakhov wishes to marry Nina and strikes a deal with Dzhabrail, in which Dzhabrail agrees to give Nina to Saakhov in exchange for 20 heads of sheep and an imported fridge. Realizing that an independently-minded woman like Nina is not likely to marry Saakhov voluntarily, Dzhabrail decides to have her kidnapped, at which point she'll have no choice. He hires the above-mentioned trio to kidnap her, but they find it difficult to get her alone, as Shurik has also fallen for the girl and spends a lot of time with her. Dzhabrail convinces Shurik that Nina is madly in love with another man and that she would like Shurik to kidnap her as part of an ancient custom. Despite his own feelings, Shurik agrees to make Nina happy. Shurik finds her at a campsite, says goodbye, and zips up her sleeping bag, allowing the trio to grab the bag and drag her away, taking Nina to Saakhov's dacha.

Back in town, Shurik realizes he's been duped and runs to the cops, only to be intercepted by Saakhov (Shurik doesn't yet know he's involved) and, after hearing Shurik out, warns him that the cops will arrest him as a co-conspirator. Instead, Saakhov suggests going straight to the prosecutor. Saakhov takes him to a party and gets Shurik drunk, then calls the local psychiatric clinic and has Shurik committed as an alcoholic.

At Saakhov's dacha, Nina is locked in a room. The trio try to cheer her up by bringing her food and singing a song. She appears to be interested, only to use the distraction to slip away. She is stopped by her uncle and is once again locked up. Finding out that he's involved, Nina declares a hunger strike. Saakhov tries to go inside with a bottle of wine and some flowers only to walk out covered in the wine. Saakhov and Dzhabrail decide to give her some time to come to her senses and drive away, leaving the trio to guard her.

At the clinic, Shurik realizes that Saakhov is involved and manages to escape, meeting Edik outside. They drive to Saakhov's dacha, disguising themselves as doctors (complete with masks to hide Shurik's face) and claiming that they are doing vaccinations against a deadly plague that's ravaging the area. Edik then injects the trio with sedatives, while Shurik goes up to Nina's room. Thinking that he's involved, Nina hits him on the head and runs away, stealing one of the trucks in the yard. This results in a car chase with the trio following Nina, and Shurik and Edik following the trio. The crooks manage to capture Nina and take her vehicle. However, the sedative then takes effect, and the vehicles nearly crashes. Shurik manages to catch up and prevent the crash. He begins to untie Nina, only for her to start cursing him until he shuts her up with a kiss.

At night, Saakhov has fallen asleep in front of the TV in his apartment. Suddenly, Nina appears with mask-wearing and armed Shurik and Edik, who claim to be Nina's brothers. They say that they have come to enforce the "law of the mountains". Scared and not recognizing them, Saakhov attempts to jump out the window, only to be shot in the butt by Edik. When Nina confronts him about this, Edik reveals that the rifle is only loaded with salt. At the trial the next day, where the trio, Dzhabrail, and Saakhov are being charged, Saakhov is unable to sit. Shurik walks Nina to her bus and then follows on his donkey.

In 2014, a remake with an all-new cast was released with a mostly-unchanged plot. According to the director, his goal was not to make a remake but to "make a big cinema-attraction for the new generation". This remake was both a critical and a commercial failure.