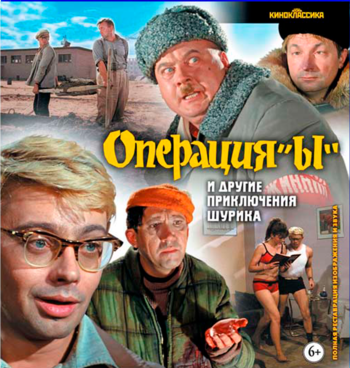 Operation Y and Shurik's Other Adventures (original title: Операция "Ы" и другие приключения Шурика) is a 1965 Soviet comedy film directed by Leonid Gaidai. The film is made up of three independent parts all of which involve a young man named Shurik, a naive and nerdy university student who keeps finding himself in ludicrous situations. The film is considered to be the first of the so-called "Shurik trilogy" (including Kidnapping, Caucasian Style and Ivan Vasilievich Changes Profession).

Part 1, "Workmate", involves a burly drunk named Fedya refusing to give up his seat on the bus to a pregnant woman. Shurik puts on sunglasses and pretends to be blind, so Fedya reluctantly gives up the seat to him but gets enraged when Shurik instead offers the seat to the pregnant woman. Fedya starts a fight and is arrested. The judge sentences him to 15 days of community service. By a strange coincidence, he is sent to work at the same construction site where Shurik works part-time, and the manager puts them on the same crew. Fedya doesn't do his work, bullies Shurik, and plots his revenge. Shurik finally strikes back, starting a Tom and Jerry-like chase through the site. Finally, Shurik subdues Fedya and begins to re-educate him.

Part 2, "Déjà vu", has Shurik dreading the final exams at the university. Like every other student, he is desperately looking for lecture notes and spots them in the hands of a girl named Lida riding a streetcar. As he's reading the notes over her shoulder, they become so absorbed by the act that they become oblivious to everything else. Lida is convinced that Shurik, who doesn't speak a word while reading, is a female friend of hers. At Lida's apartment, they continue reading while eating and resting, with Lida taking off her clothes, before going back to the university. Shurik is distracted and loses Lida. He passes his exam and is introduced to her by another student. He doesn't recognize her but is enchanted. He walks her home and, after getting past an angry dog, they end up in her apartment. There, he begins to get a sense of déjà vu. He tells her, and she assumes that he may be psychic. They decide to test it by having Lida write a task she wants him to do and having him guess it. Shurik kisses her, and Lida lets the piece of paper (with "find the teddy bear") drop to the floor, no longer caring about the wish. They decide to meet up again after the next exam.

There is also a subplot involving another student trying to cheat his way through the physics exam using a radio disguised as a pocket flower and an ear bandage, to communicate with a friend of his who has the textbook and notes in front of him. He even appears to get away with using radio jargon in front of the professor. Then the professor uses the radio equipment in his bag to intercept the communication and then jam it, before approaching the student, commending him for the elegant design, and then failing him.

Part 3, "Operation Y", starts with a warehouse manager attempting to cover up his own thefts by hiring three petty criminals (the Coward, the Fool, and the Pro) to stage a break-in and trash the place a little. The plan is simple, the Coward distracts the elderly lady who works as the night guard and knocks her out with chloroform, the Fool breaks the locks, and the trio then ransacks the place. The plan goes awry when the elderly woman, Shurik's landlady, asks him to cover for her for a few hours. The Coward is surprised by Shurik's presence and accidentally puts himself to sleep with the chloroform-soaked handkerchief. When the trio finally breaks in, a slapstick fight begins between Shurik and the trio (minus the sleeping Coward) using the various items in the warehouse (including musical instruments and rapiers). Shurik manages to subdue the Fool and the Pro but falls asleep after wiping his face with the Coward's handkerchief. The landlady arrives and takes the trio to the cops.