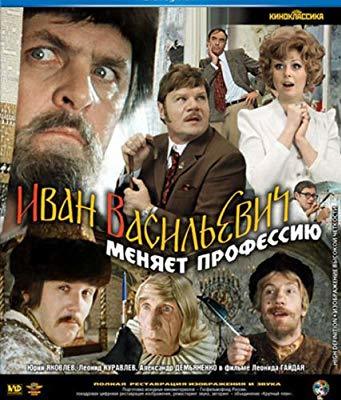 A Soviet comedy movie released in 1973, and still immensely popular in The New Russia — like most Leonid Gaidai movies from that era. Based on a 1935 play by Mikhail Bulgakov, with a setting update — moving the "present day" action from the 1930s to the 1970s — but generally staying faithful to the original, with most of the funny lines taken directly from the play. One of the most promiment changes in the film was the merge of the Timofeyev character with the protagonist of two of Gaidai's previous films to form the so-called "Shurik trilogy".

Engineer Alexander Sergeyevich "Shurik" Timofeyev (named Koka, from Nikolay, in the play) invents a time machine, which he uses to open a rift to the 1500s Moscow, straight into the palace of Tsar Ivan IV the Terrible. In the chaos that ensues, the time machine is damaged (in the play, it stays intact but its key is lost, forcing Timofeyev to seek a keymaker for a replacement), leaving the Tsar stranded in the present day while his namesake and look-alike, Soviet bureaucrat Ivan Vasilievich Bunsha, is stuck in the past with Gentleman Thief George Miloslavsky. The two are forced to dress as the Tsar and a noble, until their ruse is eventually exposed and they are rescued into the present just in time when Timofeyev fixes the time machine.

Meanwhile, back in the 20th century, Ivan IV hides in Timofeyev's apartment until he encounters the inventor's wife Zinaida, an actress who had left Timofeyev for her director Yakin, and later Bunsha's wife, who mistakes him for her husband. She and Timofeyev's neighbor Shpak (previously robbed by Miloslavsky) call the police and ambulance, resulting in the two Ivans and Miloslavsky being taken away — although the Tsar escapes and returns to his time with Timofeyev's help.

In the end, it is revealed that it was All Just a Dream. Zinaida returns to Timofeyev, saying that she didn't even have a director named Yakin, and while the time machine didn't work in reality, the two reconcile. In the play, it further turns out that Shpak was robbed in reality, not just in the dream.