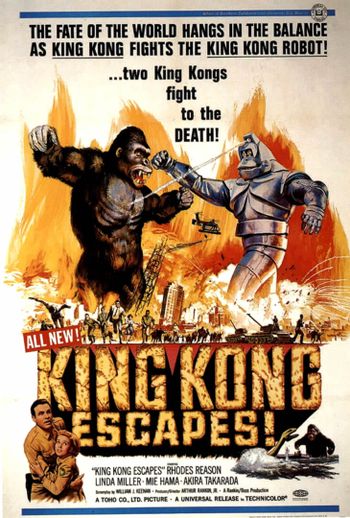 King Kong Escapes (aka King Kong's Counterattack) is a 1967 film coproduced by Toho Co. Ltd and Rankin/Bass Productions. A loose adaptation of The King Kong Show cartoon series, it was the last time Toho was able to use the King Kong character. This film is notable for the King Kong suit not being in great shape and the introduction of Gorosaurus, who would go on to become a major character in Destroy All Monsters, where he helped Godzilla kill King Ghidorah. By the way, it's not a sequel to King Kong vs. Godzillanote though it feels like one, with the cast already aware of Kong at the start due to the different Kong suit and size scale used in this film.

On the payroll of a unknown Asian country, Evil Genius Dr. Who (no, not that Doctor Who) builds Mechani-Kong in order to harvest Element X, but the radioactivity shuts the robot down. Meanwhile, the submarine of Commander Carl Nelson is damaged, giving him, Lt. Commander Jiro Nomura, and Lt. Susan Watson the opportunity to investigate Mondo Island's legend of King Kong. Susan gets left behind and gets attacked by Gorosaurus. King Kong comes to her defense, and Susan and the others flee to the submarine. Susan manages to persuade Kong to let them leave, and this becomes worldwide news. Dr. Who and the other catch wind of this, deciding to kidnap Kong and later the trio in order to dig up Element X. Kong could withstand the radiation but couldn't be mind controlled, and he flees toward Tokyo. Susan and the others manage to escape Dr. Who, who sends Mechani-Kong after Kong. With Susan captured by Mechani-Kong, Kong is determined to rescue her in a battle on Tokyo Tower...