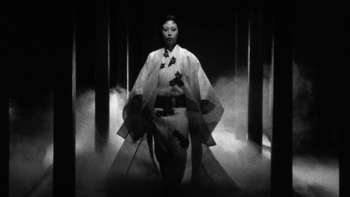 It is set during the Heian Period (9th-12th centuries). Yone and Shige, mother and daughter-in-law, are peasants living in a hut. They are all alone because their son/husband was forcibly dragooned into the army, and they haven't heard from him since. A small band of samurai, seemingly having escaped a battle, swarm down on the hut and rape and murder both women, setting the hut on fire as they go. But their bodies are strangely intact, even after the cabin burns to ash and a few charred timbers. A black cat emerges from the wilderness and licks the faces of the dead women.

A samurai approaching the Rashomon gate of Kyoto sees an eerie looking mature woman in a kimono. The strange-looking but attractive woman lures the samurai to an elegant mansion in the forest, and introduces him to a younger, very good-looking, but similarly eerie woman. The younger, hot woman lures the samurai into the bedroom. They embrace passionately—until the younger woman kills him by ripping his throat open with her teeth. The victims are always found on the remains of the burned-out hut. This happens multiple times.

Meanwhile, a young soldier named Hachi escapes a bloody battle, bearing the severed head of an enemy general. He makes it back home after a three-year absence. The shogun, impressed when the soldier delivers the head of his enemy, makes Hachi a samurai. He then gives Hachi a task: find and destroy the ghost/monster that is killing samurai. Hachi accepts the challenge, travels to the Rashomon gate, and sees the mature woman...who looks familiar.