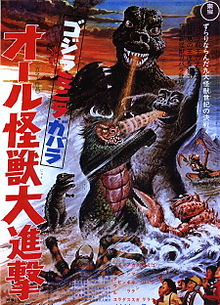 All Monsters Attack (Gojira Minira Gabara Ōru Kaijū Daishingeki), or Godzilla's Revenge as it's more commonly known, is the tenth film in the Godzilla series.

The start of the Matsuri sub-period that lasted until 1975, this film was fully aimed at a youth demographic. Instead of playing in first-run theaters, it instead played at the Toho Champion Festival, an biannual summer/winter matinee program intended for schoolchildren.

It uses extensive stock footage of various previous movies. Because of its mostly irrelevant nature, it remains one of the easiest targets for criticism and sometimes hatred from the fanbase at large; in other words, it is considered the worst film in the entire franchise (though it does have competition). It is the last Godzilla movie that Eiji Tsuburaya, special effects master of the series would be involved in before his death.

Rather than focusing on Godzilla, the film is the story of latchkey kid Ichiro, that between his parents being busy, school bullies, the bad neighborhood he lives near, chooses to escape his troubles by imagining himself going on adventures with Godzilla's son Minya on Monster Island. Through these journeys into imagination and watching Godzilla fight his battles and try to help his son figure out how to deal with his own bully, a warty ogre called Gabara, Ichiro learns how to stand up for himself and fight, which comes in handy when he's kidnapped by bank robbers. After outwitting them and beating his bully, the film ends with Ichiro's childhood possibly going into a better direction by having gained the respect of his peers.

Disputably, this film is self-contained as Godzilla is a fictional character here, but it is followed by Godzilla vs. Hedorah where it resumes Showa Godzilla's storyline.