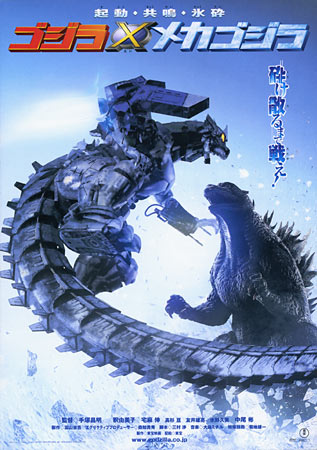 In 1999, a giant monster appears during a cyclone. The monster is Godzilla, a beast not seen since 1954. Maser tanks, developed to combat giant monsters during the 1960s, are useless. The operator and driver of one such tank, Akane Yashiro (played by Japanese model Yumiko Shaku), makes a fatal error while backing away from the monster, and accidentally hits a jeep carrying her commanding officer. The jeep ends up tumbling down an embankment, and right into the path of Godzilla, who crushes the jeep before knocking Akane's maser tank over to the side.

After this incident, Akane is demoted to desk-duty and becomes a scapegoat. Meanwhile, Doctor Tokumitsu Yuhara, a scientist who works with biotechnology and DNA computers, is called by the JSDF for a special project. Dr. Yuhara, along with several other scientists, is shown the remains of the original Godzilla. The scientists are asked to help create an anti-Godzilla weapon with these bones: a Mechagodzilla, if you will.

The years pass, and in 2003, Mechagodzilla, nicknamed Kiryu, is finally ready. Armed with an array of weapons, including the deadly Absolute Zero Cannon, Kiryu is the ultimate anti-Godzilla weapon. Akane is asked to become a pilot for the cyborg, and she reluctantly agrees, the memories of her accident still haunting her. And it's not a moment too soon, for Godzilla has shown up again. During their first face off, Godzilla proves himself to be impervious to all of Kiryu's weaponry. Before Kiryu can unleash the Absolute Zero Cannon, Godzilla roars and then leaves. Kiryu becomes unresponsive and soon goes wild, acting like Godzilla, and rampages through an entire city.

Kiryu eventually runs out of power, but the damage to the project's reputation has been done. Kiryu is put into temporary retirement. Unfortunately, Godzilla returns days later, and only after setting fire to a significant portion of Tokyo does the Prime Minister authorize Kiryu's usage. During the battle, Kiryu, remotely controlled by Akane from a nearby airplane, kicks Godzilla's ass. Just when it seems that Godzilla is in a position for the absolute-zero cannon to be used, the monster king stops playing possum and damages Kiryu right before the freezing gun is fired, causing massive property damage. To make things worse, Kiryu has also run out of power.

To solve this problem, Akane leaves the plane and enters Kiryu to control him from the inside while he receives power from all over Japan. Meanwhile, her comrades and the rest of the JSDF attempt to keep Godzilla occupied. Soon, Kiryu is back in action, but before he can even move, Godzilla attacks the cyborg, knocking Akane briefly unconscious. Before Godzilla can finish both Akane and Kiryu, one of Akane's fellow pilots, Hayama, flies his plane into Godzilla's mouth to stop him. After she regains consciousness, Akane rescues her fellow pilot and flies over the ocean with Godzilla in tow while holding his mouth shut as she prepares to use the absolute-zero cannon. The weapon is finally used after falling into the ocean, but Godzilla survives and swims away, a massive scar on his chest showing the power of the weapon. Out of power and unable to do anything, Akane stands atop Kiryu's shoulder and watches her enemy retreat.

This film contains the following examples: