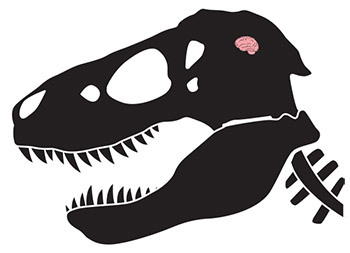 "SPACE FOR RENT"
"Stegosaurus was, no doubt, the stupidest member of a very moronic family," he wrote. Of T. rex, Knight remarked, "He was just an enormous eating machine with an insatiable appetite and with practically no brains."
— Charles R. Knight on Stegosaurus and Tyrannosaurus rex, as reported by Strange Science

Dinosaurs: slow, moronic, only existing to eat and get wiped out by a giant meteor, due to their brains being no bigger than a walnut. Slow, lumbering brutes with poor reflexes and even poorer movement... and heaven help you if you run into a carnivore, because they've only got one thing on their mind: eat.

This view of dinosaurs was prevalent from the 1850s to the 1970s, to the point where the word "dinosaur" came to mean "obsolete failure." Stegosaurus and sauropods in general are particularly associated with this stereotype, partly due to a long-standing myth that these dinosaurs were so stupid that they needed a second brain in the rear to function at all. Carnivorous dinosaurs like Tyrannosaurus rex are likely to be mindlessly violent, attacking in dangerous situations where no real animal would take the risk or when the dinosaur recently fed and has no need to hunt. Herbivores will sometimes be unrealistically passive, running away at best and making no serious attempt to defend themselves from predators, let alone effectively.

However, in settings where the dinosaurs are sapient, it's likely that the carnivores will be on the receiving end of the trope because Predators Are Mean. Sympathetic herbivores may also fall under Dumb Is Good. The biggest exception to this rule is usually dromaeosaurs, who are almost always portrayed as neither dumb nor good — the Raptor Attack trope originally came about in an attempt to avert this one. Pterosaurs are also less likely to be victims of this trope, and have their own set of stereotypes.

revamped the popular image of dinosaurs, spawning the likes of Jurassic Park, but it does still occasionally pop up every now and again. These days, however, it's far more likely to be Played for Laughs as opposed to serious fiction.

Compare Prehistoric Monster, which it often overlaps with, and Frazetta Man, in which prehistoric humans are demonized and their intelligence downplayed. Doofy Dodo applies to stupid and/or comedic dodos (ironically another kind of dinosaur, as far as science is concerned). Dogs Are Dumb and Moose Are Idiots are similar tropes applying to domestic dogs and moose respectively. A subtrope of Artistic License – Paleontology and Historical Downgrade.note After all, dinosaurs as a group dominated the food chain for 180 million years. All of history since then is only 65 million years. If dinosaurs were actually Too Dumb to Live, how the hell did they manage to live for that long?