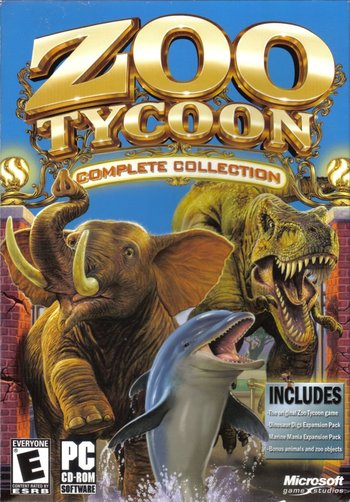 Zoo Tycoon is a series of video games (mostly for PC) where the player is given the task of managing a zoo, keeping both its guests and animals happy and healthy, or not. The first game was released in 2001, to fairly positive reviews. It was followed by a couple of expansion packs which added dinosaurs and other prehistoric animals (Dinosaur Digs, 2002) as well as marine life (Marine Mania, 2002) to the mix. The three original games would later be combined in Zoo Tycoon: Complete Collection, a compilation which also came with new bonus animals, objects and an additional pack of endangered species.

The sequel, Zoo Tycoon 2 (2004), brought the franchise into the world of 3D graphics and changed several mechanics, while still following the same set of ideas. This game also had expansion packs: Endangered Species (2005), African Adventure (2006), Marine Mania (2006), and Extinct Animals (2007). Just like with the previous titles, the sequel and its expansions were mixed into one big Updated Re Release named Zoo Tycoon 2: Ultimate Collection.

A reboot for the Xbox One and Xbox 360 was released in 2013, and in 2014, an app was announced for Windows 8 and Windows Phone. This version later had an enhanced remake titled Ultimate Animal Collection in 2017 containing additional animals from Australia and South America.