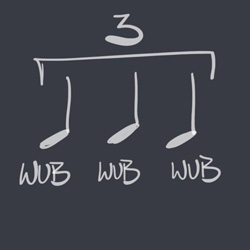 (Skrillex was not among said artists.)
Advertisement:

Dubstep is a genre of Electronic Music that began in South London in the early 2000s, and has risen to become one of the most popular forms of electronic music in The New '10s. Branching off from UK garage and grime, dubstep primarily became known for a moderate tempo (typically around 140 bpm), a heavy emphasis on bass and frequencies under 100Hz and often (but certainly not always) with a distinctive "wobble" sound, commonly achieved by playing disharmonious bass tones in unison. Many artists even delve into infrasonic territory below 20Hz, which is not so much heard as felt. Rhythmically, dubstep is in Common Time by definition and owes a lot of its sound to dub reggae: both usually have a snare hit on the third beat of the bar, and both drums and bass tend to make heavy use of triplets.

Originally minimalistic, dark, and atmospheric, dubstep evolved rapidly. Beats became heavier, bass more abrasive, and as the sound gained mainstream popularity, more attention was paid to big drops and "filthy" wobbles (usually preceded by a 30-60 second long intro) than atmosphere. This new form of the style became known (first derogatorily, then as an Appropriated Appellation) as "brostep"; that is, dubstep that "bros" could enjoy. Contrast "Midnight Request Line" by Skream

, one of dubstep's first crossover hits, with the Flux Pavilion remix of "Cracks" by Freestylers

, a popular song from about 2010. This division in sound has led to massive amounts of Fan Dumb and Broken Base in the dubstep community, and it will most likely only get worse, as dubstep has, as of 2012, appeared even in advertisements for films, television shows and products. Many artists that once associated with the genre are splintering off and working on other forms of electronic music, such as post-dubstep (dubstep meets R&B/soul), bass music and glitch hop.

There are two popular varieties of dubstep; the aforementioned "brostep", which is harder and more abrasive, featuring a "filthy" sound, start-stop basslines, heavy drops and more emphasis on heavily distorted riffs as opposed to the conventional "wobble" sound of classic dubstep, and often with significant Heavy Metal influences (hence the alternative name "metalstep"); and "chillstep", a Lighter and Softer take on traditional dubstep which features less distorted bass, a more spacey sound, little to no wobble riffs, less emphasis to near-absence of drops and a generally "angelic" or "uplifting" feel, although many other varieties exist, such as drumstep (dubstep + Drum and Bass), glitchstep (dubstep + glitch music, occasionally with some chiptune thrown in) and noisestep (dubstep + noise/industrial). Dubstep is known among artists for its ease of fusion with non-electronic music genres, such as classical, hip-hop and soul music. Its influence has also been felt in other genres of electronic music, particularly in EBM (electronic body music), IDM (intelligent dance music), Industrial Metal and some hard varieties of Techno and Trance.

While the fans and critics of dubstep will doubtless be trolling each other in music forums for years to come over its artistic merits or lack thereof, the impact dubstep has had on the electronic music world is undeniable.

Tropes associated with the dubstep genre: