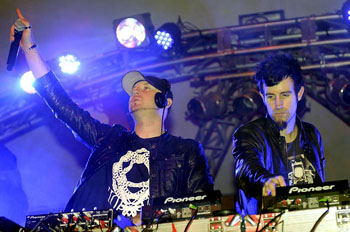 McGrillen on the left, Swire on the right
"You blocked me on Facebook, and now you're going to die!"
— The defining line of the song "Internet Friends"
Advertisement:

Knife Party is an Australian Electro House duo founded in 2011 by Pendulum members Rob Swire and Gareth McGrillen. After making their debut in Space, Ibiza in August 2011, they became a very popular name in the dubstep scene. After Pendulum was announced to be on hiatus in July 2012, Swire and McGrillen focused all of their energy into this project.

Their first EP, 100% No Modern Talking, was released digitally through Pendulum's record label EarStorm, and all subsequent releases have been issued both through EarStorm and the American electronic label Big Beat Records. The duo reportedly produce their music in the program Nuendo due to its linking system and workflow environment, with Swire at one point stating that he switched to Nuendo from Logic Pro.

Their music has varied in sound over the years, first specializing in oddly-titled tracks with frantic energy and high, squealing synths (100% No Modern Talking, Rage Valley) and then leaning into darker and more complex styles (Haunted House), before finally encompassing everything from trap to electro house to disco (Abandon Ship).