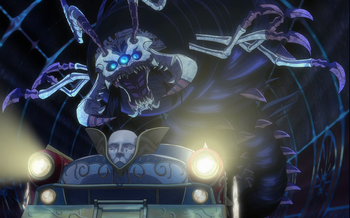 Objects In Mirror Are Closer Than They Appear
Commentor 1: Arthropleura was only 3 meters in length and ate only ferns.
Commenter 2: ONLY? YOU DON’T DESCRIBE SOMETHING THAT TERRIFYING WITH “ONLY”. I mean, valid point, BUT DON’T USE ONLY TO DESCRIBE MY NIGHTMARES!
— Two random Youtube Commentors
Advertisement:

In fiction centipedes, caterpillars, and similar creatures are sometimes used as a fancy alternative for the everyday Giant Spider or Scary Scorpions, and even more so in eastern fiction. Sometimes, a human-centipede hybrid will appear, usually sporting multiple limbs and a venomous bite. In Video Game settings, expect to see it detach its own body parts and/or remove one body segment at time, as if it's some kind of organic train. Another apparent power is their ability to curl up like a ball and roll over their foe. They are particularly prevalent in Japanese media, due to centipedes being a common problem there, as well as being generally regarded as a symbol of impurity and uncleaniness.