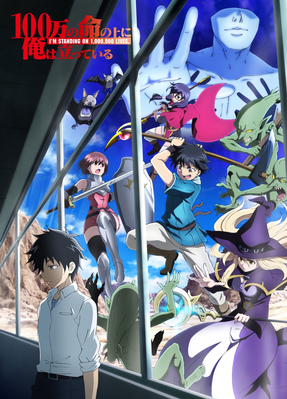 Why am I chosen to protect the city of Tokyo, which I HATE?!
Advertisement:

I'm Standing on a Million Lives (Hyakuman no Inochi no Ue ni Ore wa Tatte Iru) is a manga written by Yamakawa Naoki and drawn by Nao Akinari, serialized in Kodansha's shōnen Bessatsu Shōnen Magazine since June 2016 and licensed in North America by Kodansha USA. An anime adaptation of the manga officially began airing on October 2, 2020 produced by Maho Film and directed by Kumiko Habara, with Takao Yoshioka writing the scripts, Eri Kojima and Toshihide Masudate designing the characters, and Ken Ito composing the music.

The story begins with Yotsuya Yuusuke getting lectured by his teachers for having no over-arching goal in life and generally looking like he's not interested in his school studies, because he's not.
During this time, he notices that he's getting side-eyed looks from the School Idol Iu Shindo, who is chatting with Kusue Hakozaki, who was never in her social circle before.
No sooner does he get out of school than the three of them are magically transported to a game-like world by a self-proclaimed game master from the future who doesn't actually explain anything but just gives him a job via roulette wheel and the three of them a quest before disappearing.

I'm Standing on a Million Tropes: