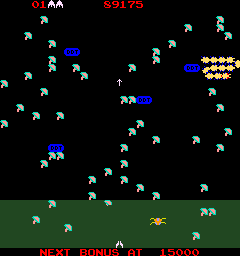 You're totally lost in a dark, perilous forest. Dangerous mushrooms are quickly pushing up through the forest floor, snaring you on every side. Something slimy flashes through the forest maze, moving in on you. The MILLIPEDE, not of normal proportions but a gigantic monster, is attacking you.
— Instruction manual
Advertisement:

Millipede is a 1982 video game. Defend yourself from hordes of larger-than-life insects. The bugs keep coming — all kinds — and the challenge continues while the intensity increases.

Although this game uses the same format and controls as Centipede, Millipede offers many extra elements that test your skill limits. You still shoot from the bottom of the screen at a field of mushrooms, but instead of battling just the original four arthropods, you now face a deadlier variety of enemy bugs: millipedes, spiders, bees, beetles, earwigs, inchworms, dragonflies, and mosquitoes. Naturally, each of these creatures has unique characteristics that must be studied. In addition, the mushrooms move up or down, and sometimes change around after a level ends.

Fortunately, there is a new feature that can be used to the player's advantage: DDT bombs. Up to four of them can appear on the playfield at any given time. Shooting one of them unleashes a deadly gas cloud that destroys any insects, flowers or mushrooms in the area.

After every few levels, a swarm of insects appears; the point value for each insect shot during the swarm increases by 100 points each time, up to 1000 points apiece.

Another feature is the option to start at a higher level of difficulty, which progresses as the player scores more points (similar to Tempest).