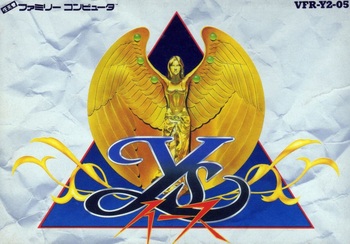 Ys: Ancient Ys Vanished ~ Omen, released on June 21, 1987, is the first installment of the Action RPG series Ys, developed and published by Falcom. The game follows Adol Christin, a 16-year old swordsman who seeks adventure, which takes him to the island of "Esteria" northwest of the continent of "Eresia". Upon arriving in the town of Minea, a fortune teller named Sara speaks of an ancient evil that sleeps in the island. Adol is informed that he must seek out the six "Books of Ys", a collection of tomes containing the history of the titular ancient land, while presenting him with clues on how to defeat these dark forces.

The game differentiates itself from other Eastern RPGs of the time by shying away from traditional Turn-Based Combat. Instead, it features a rock-paper-scissors style of fighting colloquially called the "Bump Attack" system where combat and its results happen automatically upon making contact with an enemy. To add an extra degree of strategy, Ys allows the player to manipulate the outcomes of each battle based on what direction they approach opponents in. To offset this, Adol has Regenerating Health that automatically activates between fights, a mechanic that would become a staple of the series and would see wider adoption throughout games in the 21st century.

Ys: Ancient Ys Vanished ~ Omen was originally released for the PC-8801. In the years since, it was ported to a number of other computers and home consoles: in order, it saw ports for the X1, PC98, FM-7, MSX2, Famicom, Sega Master System, MS-DOS, Apple IIgs, and Sharp X68000. While most of these versions were exclusive to Japan, the Master System, DOS, and IIgs ports did see release in North America, with the former also receiving a European release, all in 1989.