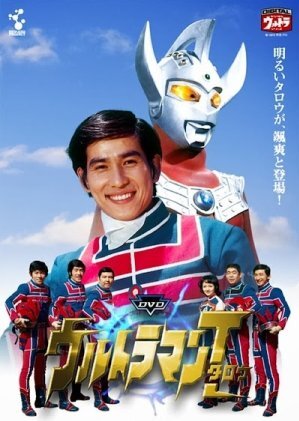 Ultraman Taro is a Japanese Series, the sixth Ultra show, aired from 1973 to 1974, with 53 episodes. Ultraseven's first cousin, the son of the Ultra Mother, comes to Earth and merges with Kohtaro Higashi, a young boxer and drifter. Taro is powerful and eager to fight, but he's a bit green. His mother and Ultramen from past shows lend a hand. This show has been one of the highest rated in all the franchise, topping a trend started by the Return of Ultraman two years prior.

Although it is sometimes considered an Affectionate Parody, this series continues with many of the tropes laid down by its predecessors, and seems to be more of just a series which heavily took part in all the trends and tropes introduced in the mid-1970's Tokusatsu Boom. Tsuburaya refers to Ultraman Taro as 'the fairytale of the Ultra Series'. In keeping with this vision, many monsters are inspired by Japanese legends.