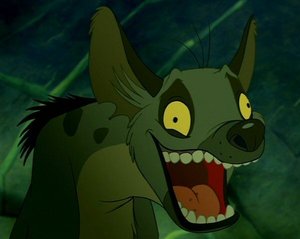 Shut up. It's an endearing character trait.
Michael: What's so fucking funny?
Harold: Life. Life's a goddamn laugh riot.
— The Boys in the Band
Advertisement:

A character for whom every thing is funny, and everything is worth a laugh. They see the funny side of everything, and you can expect this character to laugh regardless of whether he just got hit with a pie or missiles are raining down from above. They'll laugh through sun, rain, sleet and snow, and they usually do it so much that it becomes a sort of Catchphrase for them.

For villains, this often overlaps with an Evil Laugh, and, in fact, this trope is more associated with madness rather than heroes or neutral characters, and this often crosses with Comedic Sociopathy. A Giggling Villain has laughter as a defining characteristic.

A good Boisterous Bruiser does a lot of laughing, just because they LIVE LARGE!

Do not confuse with Lena Hyena. Compare The Pollyanna, who is always happy.

Incidentally, the inspiration for this trope name, spotted hyenas (Crocuta crocuta), aren't really laughing when they make their infamous vocalizations. It appears to be a form of communication used mostly when fighting for food or in social conflict. For actual hyenas portrayed in a negative light, see Heinous Hyena. Also, the Hyena is often the sole exception to a Tough Room.