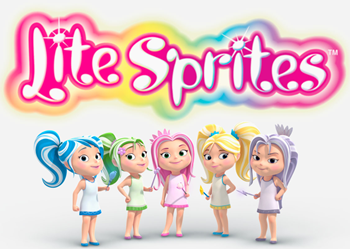 Light up the world with color!
Advertisement:

Lite Sprites were a line of toys that debuted in 2011. The Lite Sprites include the cheery Prisma, the sleepyhead Astra, the tomboy Brooke, and the hyper Meadow. With their Magic Wands, they bring color and light to the world of Lite-Topia—except for Bleak, the rebel sprite, who steals color instead. The toyline was discontinued in 2013.

that aired on The Hub. The special, entitled "Shine On," shows the Sprites having a slumber party and reminiscing about how they got their magic wands.

The special includes examples of: