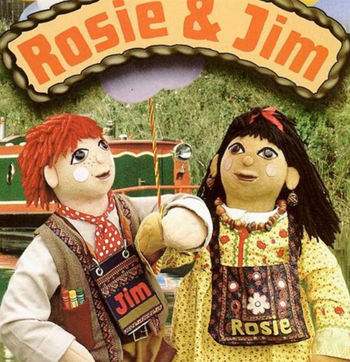 Rosie and Jim is a children's live-action puppet show by Ragdoll Productions (creators of Teletubbies and Brum) for Central Independent Television (the ITV franchise serving Central England), which was broadcast between 1990 and 2001.
Advertisement:

The show is about two ragdolls called Rosie and Jim, whose owner says they like to pretend they come to life, which they do, but only when the adults don't know. A marionette duck sits on the roof of their narrowboat, the Ragdoll, and quacks when the coast is clear. Rosie and Jim do play with the children they come across, because children know the ragdolls are alive. At the end of each episode, the boat owner, a human actor, talks about their real life job.

The show was hosted by three celebrities, John Cunliffe (1990-93), Pat Hutchins (1994-96), and Neil Brewer (1997-2001). The show was a huge success for Central because it taught children about places they hadn't visited yet, though it wasn't as big a success as Teletubbies.

Rosie and Jim provides examples of::