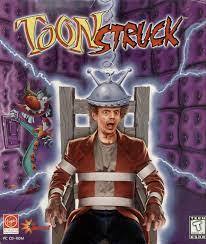 Christopher Lloyd has another toony adventure
"Ready for some speedy, convenient and only relatively disturbing hole travel?"
—Drew Blanc
Advertisement:

Toonstruck is an Adventure point-and-click game developed by Burst Studios and published by Virgin Interactive on October 31st 1996, for MS-DOS. It uses FMV of Christopher Lloyd as Drew Blanc, as well as animated cartoons, making most of the game have a Roger Rabbit Effect.

The basic plot goes that character designer Drew Blanc has a meeting with his boss, who demands him to create more bunny characters for the 10th anniversary of the "Fluffy Fluffy Bun Bun Show", since it needs something new and fresh to retain its audience, for the very next day.

Thus Blanc has to pull an all-nighter to figure out what kind of bunny would go well with the titular character of FFBB show. While he's at it, he gazes up at one of his own designed characters, Flux Wildly, in a sketch he has on the wall, longing to actually use him instead of the rabbit he's gotten fed up with.

He nods off, suffering from author's block. He wakes to the sound of his TV turning on and displaying said show, only for it to turn into a void that sucks Blanc into the cartoon world! In it, he meets his very own character, Flux, and asks him for help to return to the human world. Flux takes Blanc to the king of Cutopia, who promises to help him go back, in exchange for gathering the materials for the Cutifier - a machine to counter the Malevolator that Count Nefarious has developed; a flying machine equipped with a raygun which has been used to transform the people and places of Cutopia into dark, twisted malevolence.

Thus begins the journey of Drew Blanc and Flux Wildly to find the pieces to make the Cutifier work and reverse what the evil Count Nefarious has done.

, and on the Toonstruck animator Laura Janczewski's official YouTube channel

. Besides, there is a Lost Media Wiki entry for the the unreleased Toonstruck 2

, as well as three