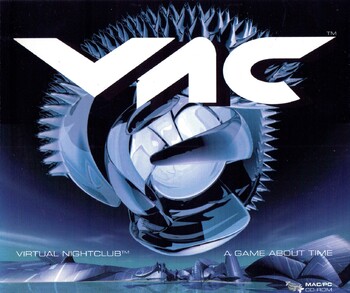 This is a game about time. Transcend time and escape. When sixteen S-Warps scattered through five time zones. Bring them back to the Time Machine.
— Timezone Gal
Advertisement:

Virtual Nightclub: A Game About Time is a point-and-click PC/Mac video game from 1997. It was originally developed by Prospect Project and published by Philips Interactive Media and Thumb Candy, largely the same team behind Burn:Cycle.

The game is set in the titular Virtual Night Club in Cyberspace, where one of the attending performers has been murdered on stage, and the player must figure out what went wrong while collecting 16 S-warps that scattered across five time zones, all in the span of six real-time hours. Along the way, the player must solve puzzles to collect the S-warps, meeting many colorful dancers and performers in Full Motion Video, including a variety of real-life musicians and artists.