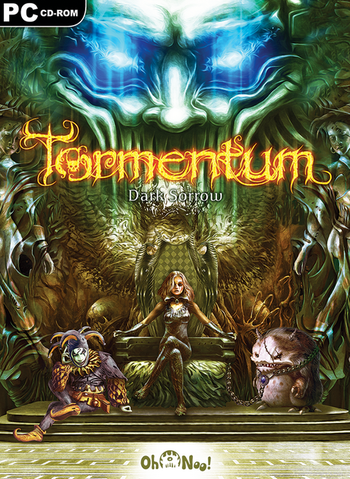 Tormentum - Dark Sorrow is a point-and-click horror adventure game from publisher OhNooo Studio. The player assumes the role of a faceless person clad in rags who awakens in a cage being flown over a meteor-blasted hellscape with no memory of how they got there. Your destination is a terrifying castle whose inhabitants terrorize the inhabitants of the surrounding wasteland and where captives of such raids are punished for their sins. Your only choice is to attempt an escape before the guards come to torture you to death. But what starts out as a single-minded quest for survival will lead to disturbing revelations about who you really are.

What sets Tormentum apart is its artwork style. Every room is an opulent scene of surreal horror in the style of artists such as H.R. Giger and Zdzislaw Bekskinski

. The visuals are a big clue that something more than just a castle full of tyrants is in play here and the images are designed in such a way to prevent the player from growing comfortable with them as the story unfolds.

Tormentum was released for Windows and OS X in 2015, while Android, and iOS versions followed in 2016. It is available for purchase on Steam.

This work contains examples of the following Tropes: