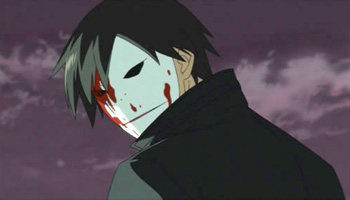 "...his face which was a paper-white mask of evil — sang us this song"
— They Might Be Giants, "Turn Around"
Advertisement:

Masks are spooky: they dehumanise, they make a dangerous inhuman inner being visible. White masks occupy a special place. They have a long history in several cultures. Being white, they are blanker and scarier, offering nothing for the eye to hold on to. And look like skulls.

Sometimes our imagination will dwell on what is under the snow-pure mask: ghastly disfigurement? Nothing at all?

Bonus points if the rest of the character is dark to accentuate the mask. Being white it'll show bloodstains starkly.

Note that the mask doesn't have to be pure white; any mask that is paler in color than most human skin tones and relatively featureless fits this trope.

Anime and manga have Noh masks

to draw inspiration from. Western tradition has Greek drama masks,

Mexicans have the calavera masks of Dia de los Muertos (Day of the Dead).