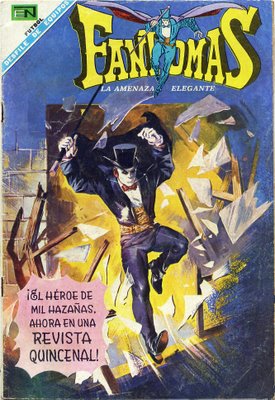 Translation: "Fantomas, The Elegant Menace. The hero of a thousand feats, now in a biweekly magazine!"
Advertisement:

Fantomas is a Mexican comic book series from the 1970s, adapted from the French novel character Fantômas. Contrasting with the original Diabolical Mastermind, while still technically a criminal, he is presented as a masked hero. Within the comic series the focus of the adventures changed over the years, going from a typical Gentleman Thief, to heavily James Bond-inspired adventures, to outright Science Fiction.

Fantomas is a thief, whose crimes are done for the thrill of it, but there is also a rebelling-against-conformity subtext to it, though more socialistic than chaotic, and never cruel. He wears a skintight white mask that he never takes off — not even when showering — apparently as his personal sign of rebellion, though he is a master of disguise as well (he would wear disguises over his signature mask!). His true identity is never revealed, even to his allies. He starts by wearing the full Gentleman Thief regalia — even the cape and cane, which you'd think would be inconvenient during second-story jobs — but eventually abandons it for a more practical look. He too has his own French Detective on his case, Inspector Gérard, who however is far below Fantomas' level of competency and served more as Plucky Comic Relief. As the series got wilder, he appeared less often.

During its "James Bond" phase, Fantomas is revealed to have a whole organization working for him, with agents that scout his targets and occasionally assist him; the most notable of these are the Zodiac Girls, 12 beautiful women of various nationalities, whose loyalty for Fantomas is almost on the level of worship; each is named after a sign of the Zodiac. His adventures went from simply stealing from Acceptable Targets to battling international criminals. He even has a supervillain, Doctor Niebla (Dr. Fog), a costumed Mad Scientist with the power to turn into actual fog, who is obsessed with destroying Fantomas, to the point of using such farfetched plans as turning the Zodiac Girls into a coven of witches.

With the addition of the character of Professor Semo to the series, it became even more fantastic. Semo is a Reed Richards-level scientist, who lives in an invisible artificial island of his own creation and who provides Fantomas with his most advanced equipment, apparently just for the fun of it (though Fantomas still enjoys hands-on thefts.) Semo also has a comical partner in his creation, the robot C-19, who provides humor with his bumbling personality.

The comic was extremely popular, and lasted well into the 1980s; most people in Latino America from that generation are familiar with at least the character's name, though most probably don't even know about the original French version.