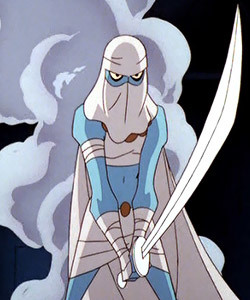 A Costume Trope where the face is covered either partially or fully with an opaque or semi-transparent veil. Which just begs the question: What's under it?

This trope is almost omnipresent in works set in the "Arabian Nights" Days, where it may be combined with Belly Dancer or Bedlah Babe. Can be part of Hiding in a Hijab when used to hide one's identity, especially if the veiled character is actually a man Disguised in Drag. It's also often used to hide less attractive facial features, in which case The Reveal is often Played for Laughs especially if some hapless suitor had been pursuing her before this, and will often result in him running away as soon as he finds out, doubling with Abhorrent Admirer if she keeps after him. Or, because the audience will often get suspicious when this trope is used and be expecting a gag, it turns out that the face underneath is actually beautiful, making it an example of Playing with a Trope.

If the veil just covers the mouth expect this character to do a lot of Eye Takes to show their expressions. And because the mouth flaps don't have to be animated with an opaque veil it can provide a method of Filming for Easy Dub.