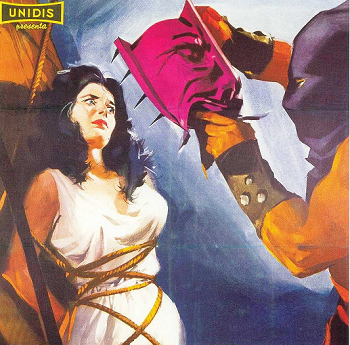 A mask that through magical or mundane means, kills the person wearing it. The mask does this by smothering, strangling, suffocating, crushing, or poisoning its victim. Most of the time, it's both a Cruel and Unusual Death.

A Sub-Trope of Artifact of Death and possible Artifact of Doom. Related to Evil Mask, which is both sentient and malevolent. Contrast with Face Hugger which, unlike the Murderous Mask, is often sentient and able to apply to the unwilling victim's face all by itself.