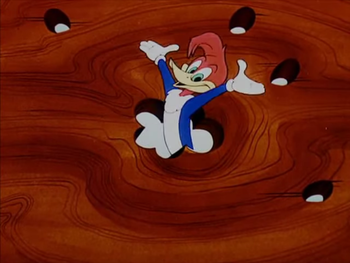 Woody Woodpecker is an iconic cartoon star, the mascot and most successful cartoon series of the Walter Lantz and Universal studios, from his breakout debut in the Andy Panda short "Knock Knock" note Although The Cracked Nut, released the following year, was the debut of his own series., in 1940, to the end of his theatrical run in 1972, lasting for 198 shorts, supplemented by appearances in comics, merchandise, a long-running TV anthology show, a short-lived contemporary TV revival, and a live-action/CGI feature film and a late 2018 YouTube revival, thus establishing him as an animation Long Runner. In 2020, the character turned 80 years old and a second season of the You Tube series was released.

He is famous for being a prominent example of the Heckler-Screwball type cartoon character, up there with masters like Daffy Duck and, of course, Screwy Squirrel himself. He has starred in many remarkable cartoons, most notably The Barber of Seville, along with his first solo short, The Cracked Nut, which made it as a runner-up.

Advertisement:
History
In the late 1930s, Walter Lantz's then-prime series, Oswald the Lucky Rabbit, was running out of gas. Besides the gradual decline of the series, he was facing competition from the Warner Bros. distributed cartoon studio operated by Leon Schlesinger—aka Termite Terrace, which was on the rise with stars like Daffy Duck (and eventually, Bugs Bunny), and the already widely popular Walt Disney was finding phenomenal success with his Grade-A lineup of short subjects as well as his recent feature length film. And on top of that, Lantz had just split his studio from directly working with Universal in order to remain independent from them save for distribution, leaving Lantz to have to front his own cash to make his cartoons. In order to keep his studio afloat, Walter Lantz quickly attempted to make successors to Oswald, among them being the character Andy Panda. While Andy was mildly popular, he wasn't the mega hit star Lantz needed badly. Fortunately, things were just about to get better.

During this time, director, animator and writer Ben "Bugs" Hardaway, fresh off of working on Looney Tunes, arrived at Lantz's studio and began work there, and with his help, Lantz created a brand new star in an attempt to give his studio the kick in the pants it needed badly — initially appearing as the villain of the Andy Panda short Knock Knock in 1940 (with Andy himself playing a minor role compared to him), Woody Woodpecker was an instant success — being a hybrid of Classic Daffy Duck's troublemaking, eccentric and over the top persona with the wiseacre attitude of Bugs Bunny, and initially combined with the vocal talents of Mel Blanc, the character quickly earned his own series the following year, starting with 1941's "The Cracked Nut".

However, the series got off to a rocky start, and it's easy to see why — in Walter Lantz and Alex Lovy's attempts to imitate the fast paced slapstick of directors like Tex Avery and Bob Clampett, they missed the mark — the gags were often very derivative and juvenile (particularly the abundance of wordplay humor), the timing was floaty and mushy, and the animation, due in part to bad inkers and lousy inbetween work, was some of the sloppiest of any cartoon from the Golden Age. Lovy's haphazard direction and even pacing often undermined many gags, and kept the series from establishing a true identity for itself—and after the first couple shorts, Mel Blanc was forced to step down from the role of the Woodpecker upon getting an exclusive contract to Warner Bros cartoons, prompting Lantz to replace him with other voice actors, eventually settling on Ben Hardaway for years. Fortunately, matters improved when Lovy quit the studio and James "Shamus" Culhane, an established Fleischer and Disney animator, took over directorial duties, and improved the shorts considerably over Lovy's—the animation and staging got notably better with the aid of animation greats such as Grim Natwick and Emery Hawkins (although the shorts were still hampered by sloppy inkers and bad inbetween work), Woody's characterization became clearer, and the gags and pacing were improved, with the series starting moving away from being a Looney Tunes clone to being more of a chase and slapstick cartoon in the vein of series like Tom and Jerry, resulting in classics like The Barber of Seville, Who's Cookin Who and Chew Chew Baby. Also of note is was Culhane often abandoning the traditional storybook like watercolor backgrounds of earlier shorts in favor of minimalist, flat colored backgrounds—a very unique concept for shorts of the time. The only genuine criticism of his works would be that Woody was more prone to acting like a Jerkass than he did in the past.

Then the series then took another change in direction when ex-Disney veteran Dick Lundy arrived at Lantz, and starting with Bathing Buddies as his first Woody short, took over direction of the series from 1947 to 1949. While his cartoons lack the brutal comedy and richer personalities of the previous shorts, Lundy's shorts received a considerable upgrade not only in terms of animation and design, but also faster timing, resulting in classics like "Solid Ivory," "Smoked Hams", "Banquet Busters" and "Wet Blanket Policy." After the end of the 1940s and the brief shutdown and reopening of the Lantz studio between 1949 and 1951, Woody Woodpecker was gradually softened as a character to downplay his previous heckler persona and play up more childlike, heroic qualities in him instead (with in and out returns to his previous qualities, if in much subdued form). Despite these changes, the series stayed extremely popular among theatergoers.

In fact, Woody was so popular among theatergoers that he managed to have a much longer track record than most theatrical cartoon series, his run lasting all the way up to 1972, straight into The Dark Age of Animation, about 30 years in work note  although Lantz's studio briefly shut down in 1949 and reopened in 1950, lasting even after his competition had long since faded away and/or branched out to television — this is due to the fact that the Woody Woodpecker cartoons were made on much lower budgets than most animation studios worked with at the time to begin with, so the series had little problems adjusting to the rise of The Dark Age of Animation with rising production costs and the fallout of popularity with theatrical cartoons. It helped matters that the bird even had a hit TV series which debuted in the 1950s, guest-starring Walter Lantz in live action segments, running at the same time he was still appearing in theaters. In fact, Lantz claimed the reason he stopped making Woody shorts was not because they weren't popular, but rather because theatrical shorts had become completely unprofitable by that point!

Woody also has a Motion Picture Star on the Hollywood Walk of Fame on 7000 Hollywood Boulevard. He's also starred in many comic books, including one story that was done by Pogo creator Walt Kelly. He's also had an occasional game tie-in.

In 1999, Universal wanted to cash in the character again, so they put together an all-new show for Woody Woodpecker and his friends, called The New Woody Woodpecker Show, animated by their in-house studio (most famous for Exosquad), and aired on Fox Kids until the block's demise in 2002. Woody was voiced by Billy West, and the shorts actually had some top talents working on it, including former The Ren & Stimpy Show staff members Bob Jaques and Mike Fontanelli. The show was rife with censorship and Executive Meddling, as the former staff members can attest to. As a result, this revival was ultimately a failure (however the show still has its fan base), barely lasting around 50 episodes, some of which weren't even aired in the US (save for a brief release of the entire series on Netflix); currently, only 13 episodes are on Hulu, and only one episode of the series has been released on DVD.

Despite this setback, his theatrical serials are still fondly remembered by classic animation fans and he is still the official mascot of Universal Studios to this day.note Though the position was stolen from him by An American Tail's Fievel from the late 1980s into the 1990s. Just when it seemed he had earned it back, Illumination Entertainment's mascots - the Minions - snatched it from him in the 2010s. The series lingered in a state of hiatus for several years until a new CG feature-length Woody Woodpecker feature was made by Universal in 2017, getting a theatrical release in Brazil and getting a direct-to-video and Netflix release in the US. A new YouTube-exclusive webseries revival of the character was also released in late 2018.

His character trademark has always been his unique, skull-splitting laugh, supplied by legendary voice actor Mel Blanc (and later, Lantz's own wife, Grace Stafford), which is up there with iconic sounds like the Wilhelm Scream and the Super Mario Bros. theme, known and recognized even by people who haven't even seen any of the Woody Woodpecker cartoons.

Many of the theatrical Woody Woodpecker shorts up to the late 1950s have been compiled into a two-volume set of DVD collections called The Woody Woodpecker and Friends Classic Cartoon Collection: The Walter Lantz Archive which also includes shorts starring other Universal cartoon character shorts, such as Andy Panda, Chilly Willy and Walter Lantz Oswald the Lucky Rabbit cartoons. To date, exactly one Woody Woodpecker short has fallen into the public domain, "Pantry Panic", and it is considered a staple of many bargain bin VHS and DVDs.

On a side note, Lantz told an apocryphal story that he got the idea for Woody from a real woodpecker that was pestering him and his wife when they were staying in a log cabin on their honeymoon. But its obvious that this was a fabricated story to draw attention from the fact that Woody was, so to speak, "inspired" by the likes of Bugs Bunny and Daffy Duck. Another hole in the story is that Lantz's honeymoon didn't take place until a year after Woody's debut in "Knock Knock" took place!

1944 (All cartoons directed by James Culhane.)

1945 (All cartoons directed by James Culhane)

1951 (All cartoons directed by Walter Lantz - no onscreen credit)