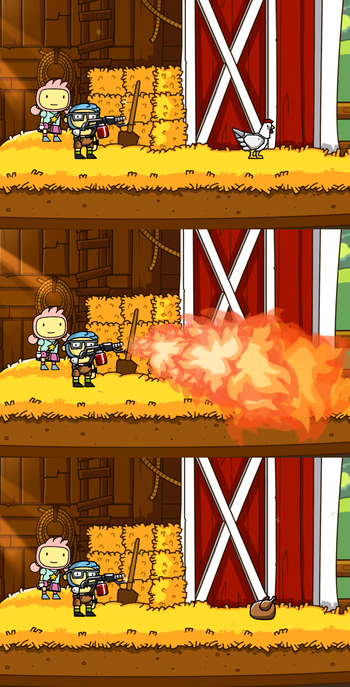 A subtrope of Amusing Injuries in which a burst of flame, explosion, or just crashing into a wall or tree instantly burns the feathers or fur off of something and magically turns it into a perfectly-roasted chicken or turkey, complete with bone drumsticks, or any other choice cut of meat. Sometimes the roast also comes complete with plates and other silverware.

Most definitely this is not how things work in real life — proper cooking requires carefully-controlled times and temperatures.

Cousin Trope to Meat-O-Vision and, for heat applied to vegetables, see Popcorn on the Cob. Contrast with the harsh aversion, Oven Logic, where a character forgets the "carefully-controlled time and temperature" bit. Similar to Instantly Defeathered Bird, where the bird survives whatever caused it to lose its feathers.