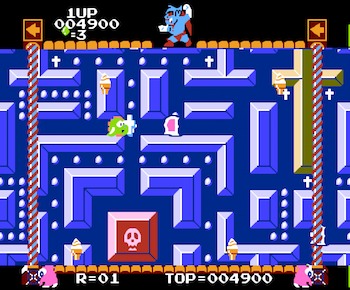 Everybody do the Shift!
Advertisement:

Devil World is a Maze Game developed by Nintendo for the Nintendo Entertainment System. It was one of the many simple games created for the console in its early years, and was the first game designed by the partnership of Shigeru Miyamoto and Takashi Tezuka that would go on to create Super Mario Bros and The Legend of Zelda. The game was released in Japan in 1984 and brought to Europe in 1987. It was later re-released on the Virtual Console in both regions for Wii in 2008, then on Nintendo 3DS in 2013.

Tamagon, a cute little fire-breathing dragon, has a devil of a problem. He has been trapped in a box within the maze of the Devil's world. The Devil's assistants are shifting the box up, down, right, and left, threatening to squash Tamagon between the walls.

Tamagon's task is two-fold: eliminate the boa-boa dots that are the source of the Devil's evil power, and then use four bibles to seal away the Devil's icon.

Not to be confused with the Konami Arcade Game also known as Dark Adventure.

Tropes appearing in this video game: