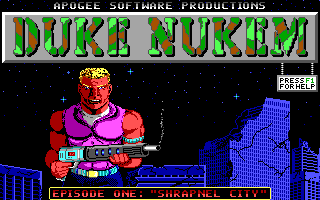 "You're wrong Proton-breath. I'll be done with you and still have time to watch Oprah!"
— Earth's greatest hero. Terrifying, isn't it?
Advertisement:

Duke Nukem is the first game of the Duke Nukem series.

A no-brainer Platform Game, the title was split into three episodes, and starts in the near future of 1997, where Dr. Proton, your average Mad Scientist, attempts to Take Over the World with his army of Techbots. The eponymous Duke Nukem, self proclaimed hero extraordinaire, who is very angry about the fact that the attack has interrupted his favorite day-time Soap Operas, gets hired by the CIA to repel the invasion and take the fight back to Dr. Proton's lunar base.

The events of the story then set off the plot of the sequel.